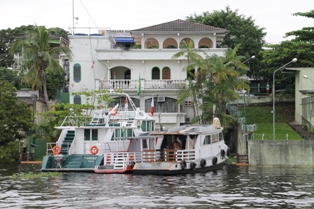 After having recorded the historic mark of 29.97 m, the largest flood since it began to be monitored daily, Rio Negro starts its ebb period that shall continue up to November.

Despite it is already downloading 5 cm, navigation still requires much attention, once the houses on the banks of the rivers are still flooded.
PROA, with its monitoring system, within this period navigates in alternative channels, avoiding the main channel of the river, and thereby reducing the inconvenience to local populations.

Although these channels are shallower than the main channels, the permanent monitoring of Amazon Western Rivers enables safe navigation for large ships with big gauge.Â Â  Â

The Watchtower of PROA in Manaus was also affected by the great flood of 2012, and had its garden and the pier for piloting boats completely covered by the waters of Educandos stream. (photo: Pilot Gilberto Coelho)